A Lot of Time on my Hands

So, before the next month starts and I go fully into Vegan Mofo mode in which I will only post on topics related to vegan food and interests, I wanted to take some time to address this other thing that's been building up in my life.

I've had a lot of time on my hands. I've been social, i've been active but I've also been a homebody a lot of the time. I've been researching. Recently several things that I have been interested in or at least aware of have been coming together in my head. Those things being yoga, philosophy, Buddhism, anxiety, inspiration, self reflection, self responsibility, relationships and building a sense of community.

In the next few posts I'll try to talk about those topics and share some links and maybe even start some dialogs. We'll see. 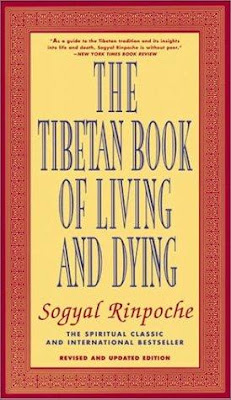 I bought this book years ago, before college, during a Borders trip with my friend Chelsea. On a superficial level I have been drawn to Buddhism since I was in middle school. I had Save Tibet stickers, incense and Buddha sculptures without really attaching any meaning to them. I identified as a Christian for the most part growing up but never felt the connection that the pastors or other followers would talk about. As a child I remember being scared by the Judgement Day sermon. I was convinced the world was going to end. As a teenager I was somewhat forced to go to a non-denominational church with my father. I never felt anything. I decided to abandon spirituality.

Fast forward to a little less than a year ago. Life was changing for me. It all felt monumental. And to be honest I went through some pretty dramatic changes in how I view the world and relationships and what kind of life I wanted for myself. At some point I had a "duh" moment where I realized that I was in control of my life and the situations I put myself in, and that perhaps I should be a little more selfish in the decisions I make.

Here's the irony. In realizing that I needed to be more responsible and take care of myself and my future, in suddenly taking a more "selfish" view of the world, I felt an urge to connect, to build a community, to give back, to be selfless.

Enter Buddhism. Not necessarily chanting to Buddha or shaving my head or taking a vow of silence..but enter openness to learning about Buddhism.

After the Flagstaff Yoga Festival this summer I started pondering the term non-attachment. How I feel about non-attachment I will discuss in future posts but suffice it to say this line of thought lead me down a path of wanting to know a bit more about the philosophy behind yoga and how in many ways it mirrors or intertwines with the philosophy of Buddhism.

So I've been reading this book in earnest for the last few weeks. When I say "in earnest" I mean slowly reading. Rereading. Writing quotes down. Bookmarking pages. Actually digesting instead of just reading. Very Buddhist of me already don't you think!

It's not quite what I expected to be honest. It's incredibly easy to read and accessible. It's inspiring me to want to find ways to "cultivate compassion" in my everyday life. I'll tell you all about it once I'm done, but for now let me share some links!

For those of you who are not familiar with the TED talks, I highly highly recommend you check them out. While browsing the different options lately I came across this video by Joan Halifax called Compassion and the True Meaning of Empathy.

Joan Halifax: Compassion and the true meaning of empathy | Video on TED.com

After watching this video I became interested in learning more about her Being with the Dying series and this lead me to Upaya Institute in New Mexico. It's a Zen center that hold all kinds of retreats and hosts scientists and spiritualists alike.

THIS lead me to the Audio Dharma Podcasts which I promptly downloaded and started listening to. The first podcast I chose was one by Philippe Goldin, who is a neuroscientist, clinical psychologist and Buddhist who is using neuroimaging in tandem with meditation techniques. The series is called Zen Brain: Trauma, Stress, Loss, and Happiness. But there are a ton of other series that I have yet to delve into all of them with different topics and different visiting speakers.

So I've started thinking, if I'm seriously interested in this stuff, in meditation and the philosophy and all that, well perhaps I need a teacher. The Upaya Institiute looks amazing and they do offer jobs in return for housing and teachings but at the moment perhaps that's not feasible.

I can across this monastery in upstate New York called Karma Triyana Dharmachakra that also has some interesting looking retreats.

Something about disconnecting from my phone, facebook, even my blog, living in a vegetarian community for a while and being in a place where I'm constantly learning again is really appealing to me lately. I plan to explore some closer DC options soon.

In upcoming blogs look forward to reading about: Animals Sanctuaries you can visit and volunteer at, my theory of the Community Relationship, new recipes and restaurant reviews, and a complete review of the Tibetan Book of Living and Dying.

Hold me to it blog readers!
Posted by Lacey at 3:47 PM No comments:

Everyone who goes to DC ends up on the Mall at some point. In fact until more recently that's all I really could think of to do when I though of DC which is sad because I've lived in the DC area all my life. Until moving to Alexandria and having metro access to DC I found it to be an intimidating and terribly boring kind of city to approach. Wrong.

DC has tons to offer in the realm of food, drinks, dancing, art and festivals. The international mixing of cultures here offers a wide array of activities and events and I am only now just beginning to appreciate that. The DC Shorts Film Festival is coming up soon and next spring the Environmental Film Festival will be going on, both of which I plan to take advantage of. Then there's the "yoga buffet" as Katie likes to call it of all the different studios and styles of meditation and yoga. And you know what ya'll? I even signed up for pole dancing classes. It's for my health....

Recently I've been on a walking kick where after taking the metro somewhere I'll just start walking. I know at some point I'll hit another metro stop somewhere and I'll get home but it's been such a great way to actually see the city.

Last week a few of my girlfriends came out to DC and we did a little daytrip that I wanted to share. Inevitably we did start our day out on the Mall but wait! There's a new face on the Mall! The Martin Luther King Jr memorial is finally done and open to the public so we went there first to check it out. 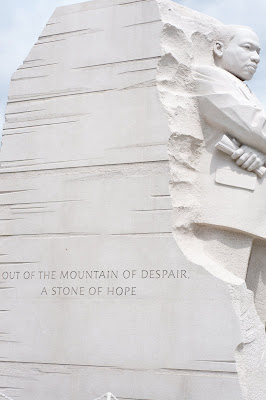 We spent probably 20 minutes or so taking pictures and walking around to read the MLK quotes that are on the walls behind his statue. During our stay we witnessed, by accident, a really cool interaction between two people. An older black man was standing next to a quote from Alabama and he was having a stranger take his photograph. While she was photographing he was explaining that he was 10 years old when the riots broke out in Alabama and that this particular quote had significance from his childhood. A white woman of perhaps the same age was walking by as this man was telling his story and she stopped and listened and then walked up to him and asked if she could shake his hand. She told him that she had been there too and they shared this memory. Rachel and I just looked at each other and said "ugh...someone should be capturing this." So look out in the future for a post about this project idea! 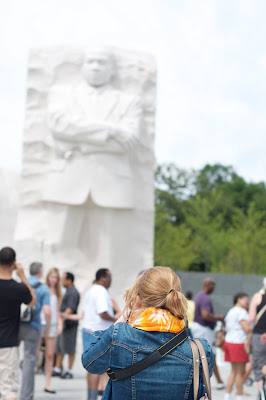 After the monument we went to Teaism for lunch and then headed over to The National Museum of Women in the Arts. This was my first time at this museum and we had the place to ourselves. I get the feeling that it's probably usually pretty empty since it's not right on the Mall. I would reccommend this gallery though - some cool photography and a really cool exhibit on the Gorilla Girls right now! Here's a few pictures of some photos I really liked. 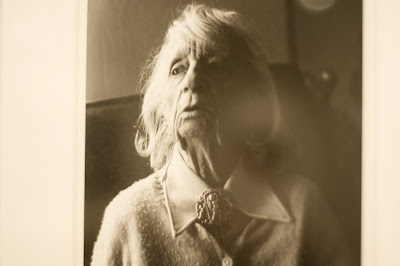 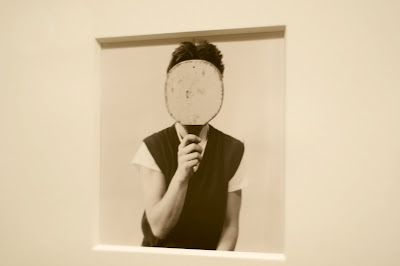 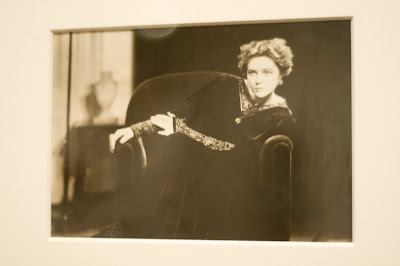 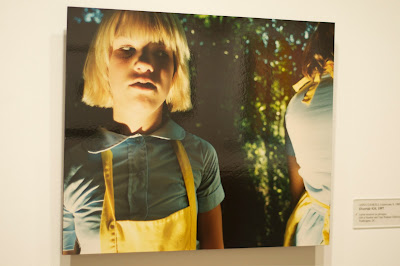 To close out the evening we went to Busboys and Poets for some vegan nachos and a brownie sunday. Day well spent.
Posted by Lacey at 1:25 PM No comments: 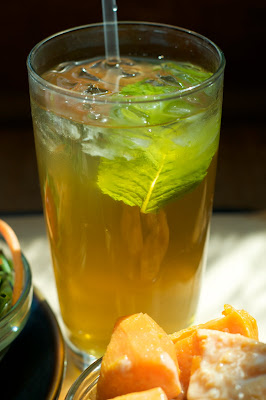 Last week I spent a day in the city with some of my favorite girlfriends and we tried out Teaism for the first time. I used to be a big tea-head when I worked at Shaharazade's in Shepherdstown years ago and while I've backed off quite a bit I do still enjoy a good tea and can sometimes be caught turning my nose up at a bag of tea dust masquerading as a good quality beverage.

We visited the Penn Quarter branch of Teaism but there is also one at Dupont Circle and Lafayette Park (which I have since been to and must say, its not as organized, friendly or well presented as the Penn Quarter one). Two doors up from the restaurant is the actual tea store where you can buy your favorites to take home, but lets get to the good stuff - the food! 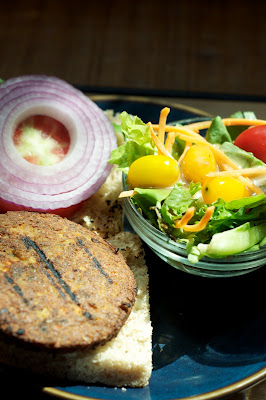 While I didn't get to sample the breakfast menu there seemed to be lots of options for vegetarians and vegans for the lunch menu. In fact, if you ask they'll give you a special menu that lists all the menu items and then tells you if things are vegan or gluten free.

I ordered the veggie burger with a side of miso dressed sweet potato salad and a Moroccan mint tea. Other things that looked tasty on the menu included the seitan stir fry, the veggie bento box, and of course mochi for dessert!

In addition, they served beer, wine and fancy sounding cocktails. The atmosphere is casual. You order at one counter and pick up your food at another but the decor was inviting and there was plenty of seating inside and out. 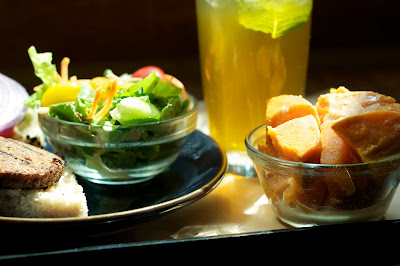 Email ThisBlogThis!Share to TwitterShare to FacebookShare to Pinterest
Labels: food, restaurant review, vegan, Where To Eat: DC
Newer Posts Older Posts Home
Subscribe to: Posts (Atom)
I travel the US and occasionally the world in search of great vegan food, home and happiness.