Where to Eat Vegan: Yo Rita - Pittsburgh, PA

After getting lost on the way to yoga on Penn Avenue I found myself on E Carson street. Funny thing is, I already knew the name and thus didn't feel the least bit lost. South Side, and in particular E Carson street, is a bit of a vegan and vegetarian gem. Jammed with tattoo shops, yoga studios, vintage shops and restaurants, E Carson is a little on the grungy side - but that's just the way I like it.

After stretching out my stomach in the (painfully) slow Yin class at Breath Yoga Studio I shuffled down the street for some tacos and salad at Yo Rita. I had read online that they were willing to accommodate vegans and while their menu asked for "no substitutions" to be made, my server assured me that my requests to leave off the dairy would be happily fulfilled.

Their menu is limited but well varied with several options for both meat eaters and veggies. Chips and two salsas - a chunky mild and a smooth medium - are brought to the table within minutes of sitting down. I started with a small but interesting salad of greens, jicama, radish, carrot and salted pumpkin seeds with an agave vinaigrette. The saltiness of the pumpkin seeds and the sweetness of the dressing provided a really nice contrast and all the crunchy greens and veggies made me feel all healthy and stuff after my yoga class.

Then came the taco! Served on soft white tortillas and a bed of cabbage, there are all kinds of fillings offered. Portobello mushrooms, crispy fried tofu, potatoes? Yum! I opted for the Velvet Underground that was running as a special that night. Their online menu doesn't seem to be up to date as the Velvet Underground is ON that menu but was only a verbal special when I went. Also - where was that brussel sprout taco last night!

I digress. Roasted beets, sweet potatoes and scallions made up the simple but flavorful taco I scarfed last night. Of course, to be made vegan they had to hold the aji amarillo crema and the aged cheddar. Would it have been better with some sort of cashew crema and or vegan sour cream and cheese? Well duh. And Yo Rita..if you're reading this... get on it!

But seriously, the food was all well prepared, fast and cheap. The tattoo style logo sets the tone without the rest of the inside decor going over the top. Service was super friendly and I look forward to sweating it out at yoga and eating a veggie taco again next time. Oh but...could I get some guac with dem tacos please?
Posted by Lacey at 9:50 PM 1 comment: 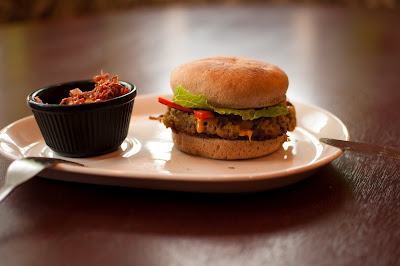 Cafe Green is housed and operated out of a cute rowhouse on 17th Street between Dupont and Logan Circles. Their menu is a cross between American soul food and Korean noodles and pancake with a full separate menu of shakes, smoothies, juices and frozen frappes. They also have a substantial amount of raw dishes on the menu! I can't wait to try their mung bean pancakes, the mac and cheese with kale and the raw pizza next time.

As usual, when I eat at a vegan restaurant, I was completely overwhelmed with all of the choices available. Needless to say it will require many more trips to Cafe Green before I will have tasted enough of the menu to choose my favorite but the two trips I have made so far have both been very satisfying.

We started with the Raw Chips and Dip - carrot and flax chips with a lemony guacamole to dip them in. They were fragile but tasty and paired well with the chunky guacamole.

Rachel ordered the Jobche with mushrooms (which they forgot to put on but then brought a side bowl of with MORE noodles and greens). We were intrigued by the mystery of yam noodles and were both impressed with their light fresh flavor. The dressing of the noodles tasted like a blend of lemon and sesame and the thick slabs of mushrooms added an extra earth flavor to the dish.

I went for the cheeseburger. I'm always curious about vegan burgers at any restaurant that offers them because I feel like they are such a hard thing to get right. Sometimes they are too mushy. Sometimes they have way to much of one kind of vegetable (usually carrot) and sometimes they are really dry. I always order them with a tiny bit of trepidation because nothing is worse than having food envy when everyone else at the table was smart enough not to take a risk on the burger. And yet, I am still drawn to ordering them wherever I go.

Well let me tell you, this may be the best vegan burger I've had yet. It may not look too fancy in the picture but it was just right. Great texture, great combination of flavors and the right balance of moistness and dryness. Composed of veggies like kale and mushrooms (I was pretty much sold at this point) and sprouted quinoa and lentils and topped with sauteed peppers and onions and a tasty cheddar cheese - I had to force myself to slow down and savor the flavor and not just devour it in two bites. The curried apple carrot slaw on the side was surprisingly good too - and this from someone who usually can't stand any form of slaw.

I held myself off from having any drinks or dessert this time but I highly recommend their milkshakes! 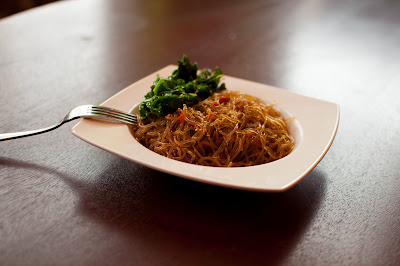 Check Cafe Green's website for the events and classes that they offer. Im excited to attend one of their Raw Life Workshops in the future and learn how to not cook some tasty treats.
Posted by Lacey at 11:03 PM 1 comment:

Email ThisBlogThis!Share to TwitterShare to FacebookShare to Pinterest
Labels: food photography, restaurant review, vegan, Where To Eat: DC
Newer Posts Older Posts Home
Subscribe to: Posts (Atom)
I travel the US and occasionally the world in search of great vegan food, home and happiness.