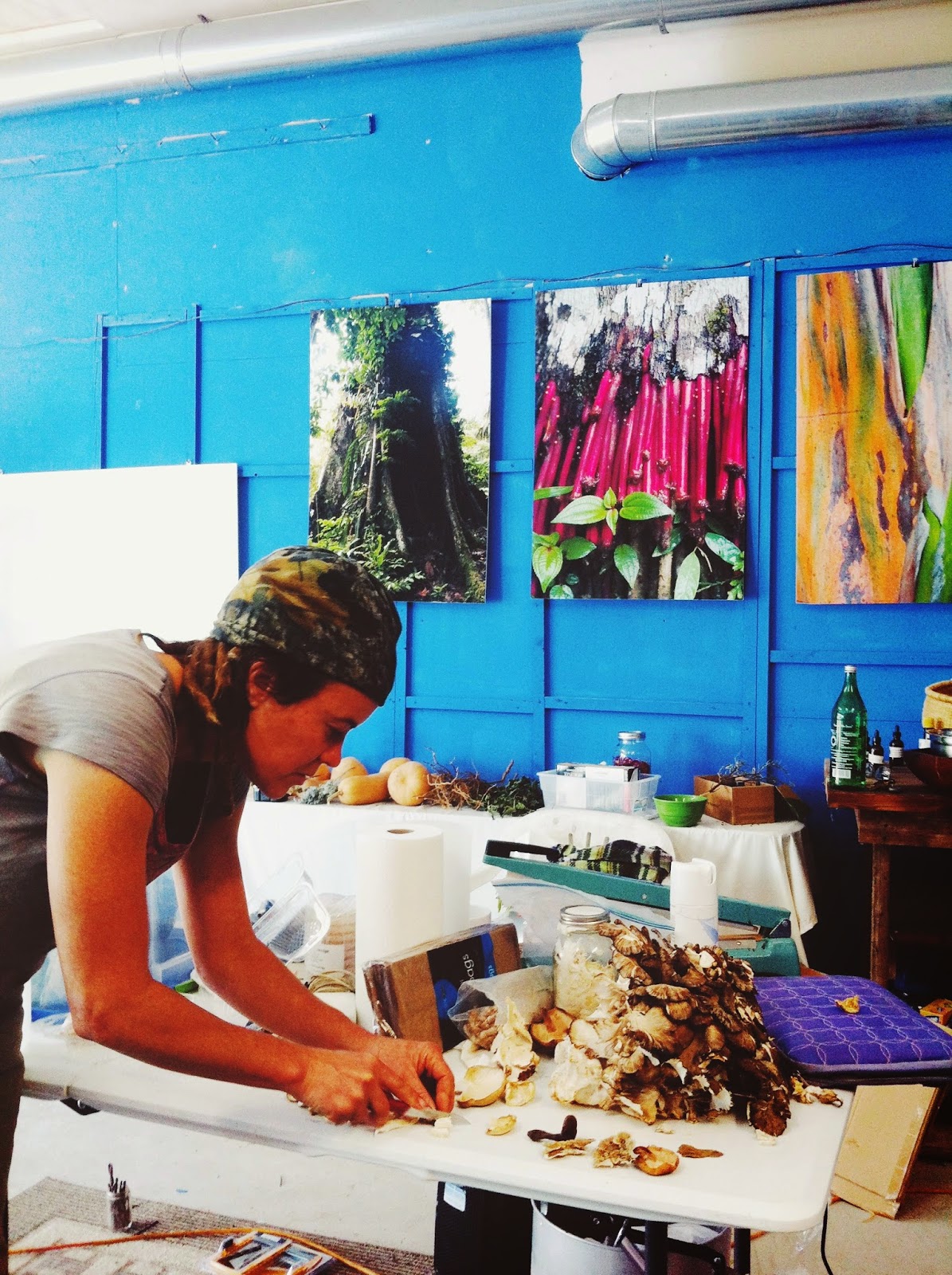 On a chilly morning in November I pulled up to Centro Ashe.
In a rural neighborhood a squat sprawling house and an oversized garage sit back from the road a bit. A tiny slat board sign out front reading: Centro Ashe est 2012, is the only things that sets it apart from the other houses.
I followed painted signs and shuffled into the garage. A ring of metal chairs in the center of the room were filled with other future medicine makers and curious counterculturists.
We sat tentatively, sipping nettle tea and milling about to look busy.

Holli is no white-coated doctor. She's not even the flowy skirt, patchouli kind of doctor.
She's a fungaculturalist - she grows mushrooms for a living.
But she's not ignorant to the abundant healing powers of mushrooms. But many of us were.
We started by introducing ourselves and talking about our relationship with mushrooms.
Answers ranged from:

I eat mushrooms
I've tried those Whole Foods grow kits without success
I drink mushroom tea, but I don't really know what it does
I've foraged once, but someone else knew what we were looking for
And my personal favorite: I've taken some really magical journeys with mushrooms

She started off our day of fungal fun by asking us to guess what percent of modern medicine is derived from mushrooms.
10? 15? 20?
No idea.

Turns out that since the medicinal properties of the ennoki mushroom were first studied and proven in Japan in 1972, more than 40 percent of our medicines have been derived from mushrooms.

Now that's not to say we didn't use mushrooms before that. It's just that the scientists, those white coat guys I mentioned before, hadn't approved them yet. Once the powers of mushrooms were chronicled for all to see the fungus hit the pill stands pretty quick.

"Humans are more closely related to fungi than to any other kingdom, including plants, protozoans, and bacteria, and we have developed similar defenses against mutual disease-causing enemies. The idea is that because fungi and animals suffer from many of the same diseases, fungal medicines are active against many of the organisms that infect humans. Though ancient cultures have known this for centuries, scientific studies have only confirmed their incredible healing powers within the past few decades." 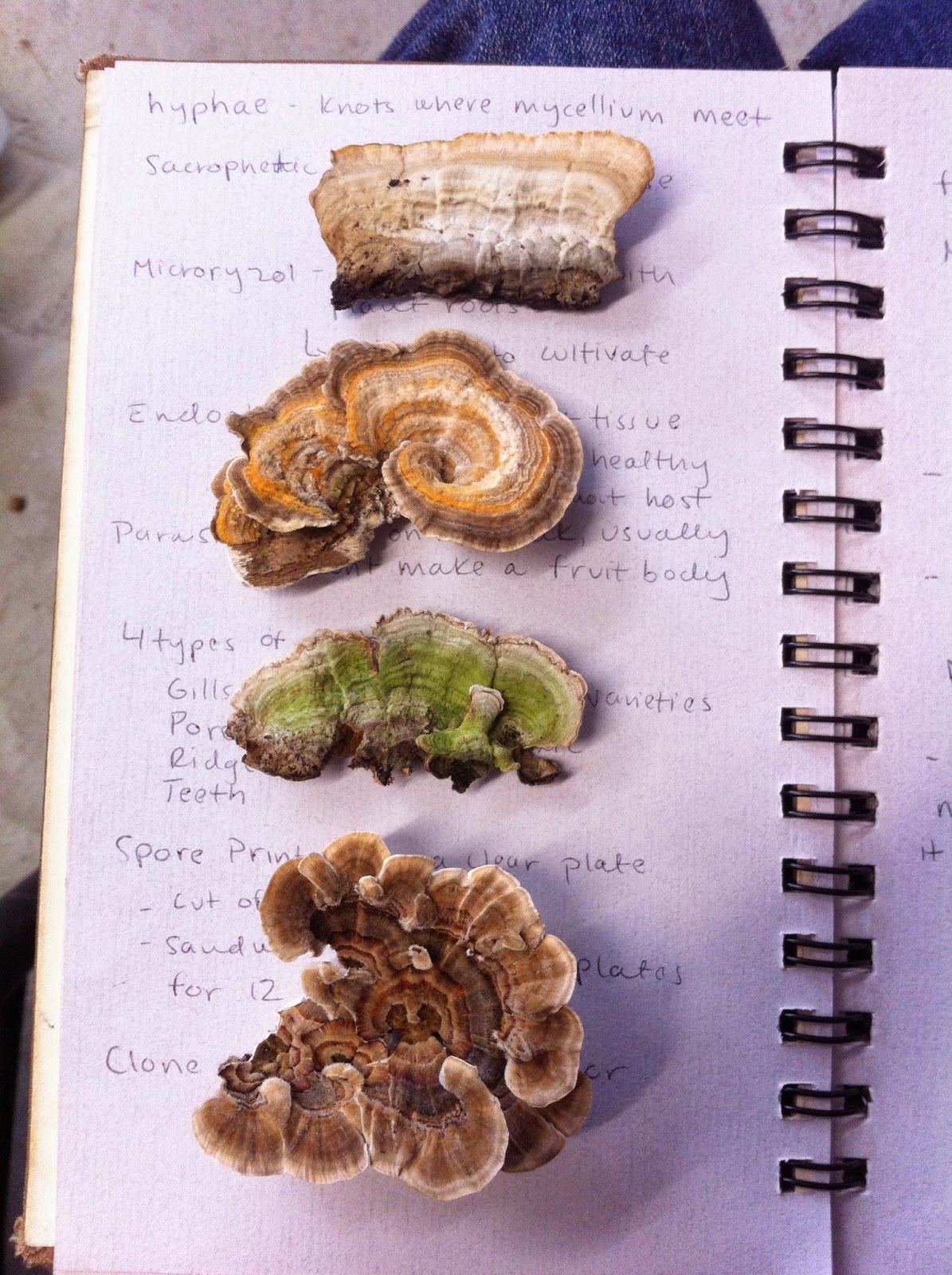 The main fear of using foraged mushrooms is the well known fact that some mushrooms are poisonous and many mushrooms look alike.

A cute little mushroom saying we learned goes like this:

The main rule when hunting for mushrooms is: When in doubt, throw it out.

Holli brought in some specimen for us to ID.
The four mushrooms above are all either Turkey Tail (known to be anti-malarial, anti-microbal, anti-oxidant, and anti-tumom), or look alikes. When fresh and attached to trees their colors are very similar and it is only by a few tells - mainly the texture of their undersides, that can give you a true ID. 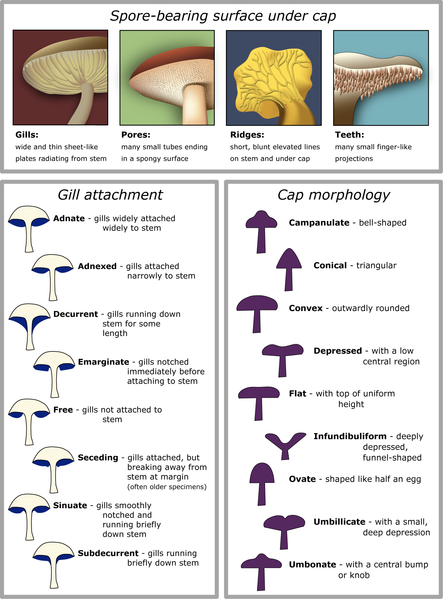 Along with the 4 types of undersides there are four basic types of mushroom in the  fungi kingdom:

Sacrophetic - the type that decomposes matter and releases acid
Microryzol - the vast networks that sync up with roots under the ground. Very difficult to cultivate but crucial to healthy plant and soil relationships
Endophytic - the type that invades plant tissue but leaves the host functioning and healthy - these can be grown sans-host
Parasitic- the type that feed on the weak, these slimy specimens don't usually produce a fruit body of their own

As we learned about hyphae and spore prints and tried to wrap our brains around the scale of the underground network attached to the tiny umbrella shaped fruits we cal mushrooms, our eyes started to glaze over from overload.

Holli wisely put away the power point and started getting us to just jump in and try it.
For the second half of the class we learned how to inoculate wood for mushroom cultivation and make little fungus boxes to take home.

The general steps were: find some fresh wood that isn't too big around, drill holes into it, hammer the plugs in, cover the whole with wax, bury, wait. 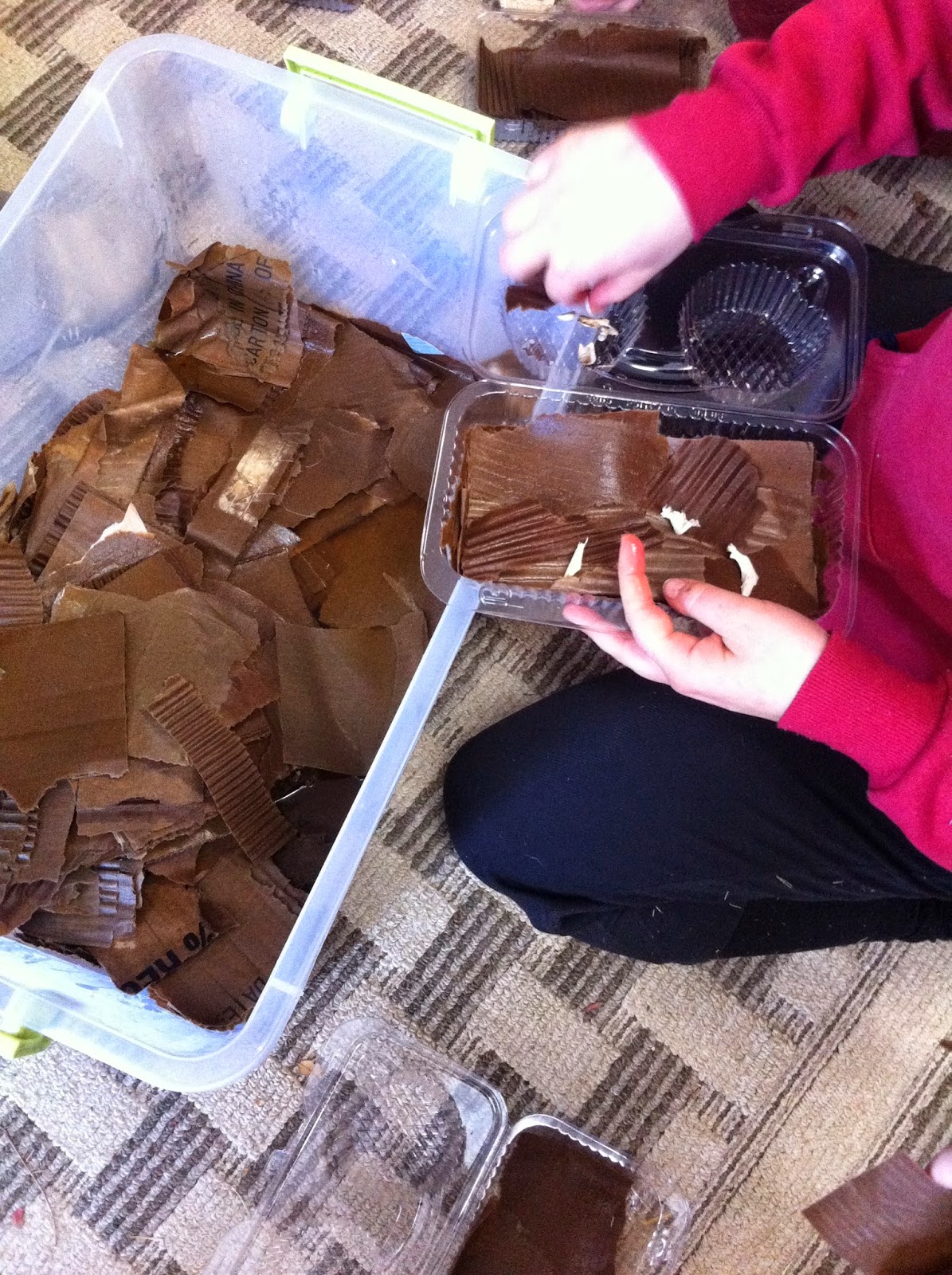 We learned some interesting do's and don'ts of the cultivating world.

DO:
-Start with Oyster Mushrooms - as they are most forgiving to cultivate
- Learn your wood - not all wood will grow mushrooms
- Study your mushroom - what's it's natural habitat? What does it like to eat? 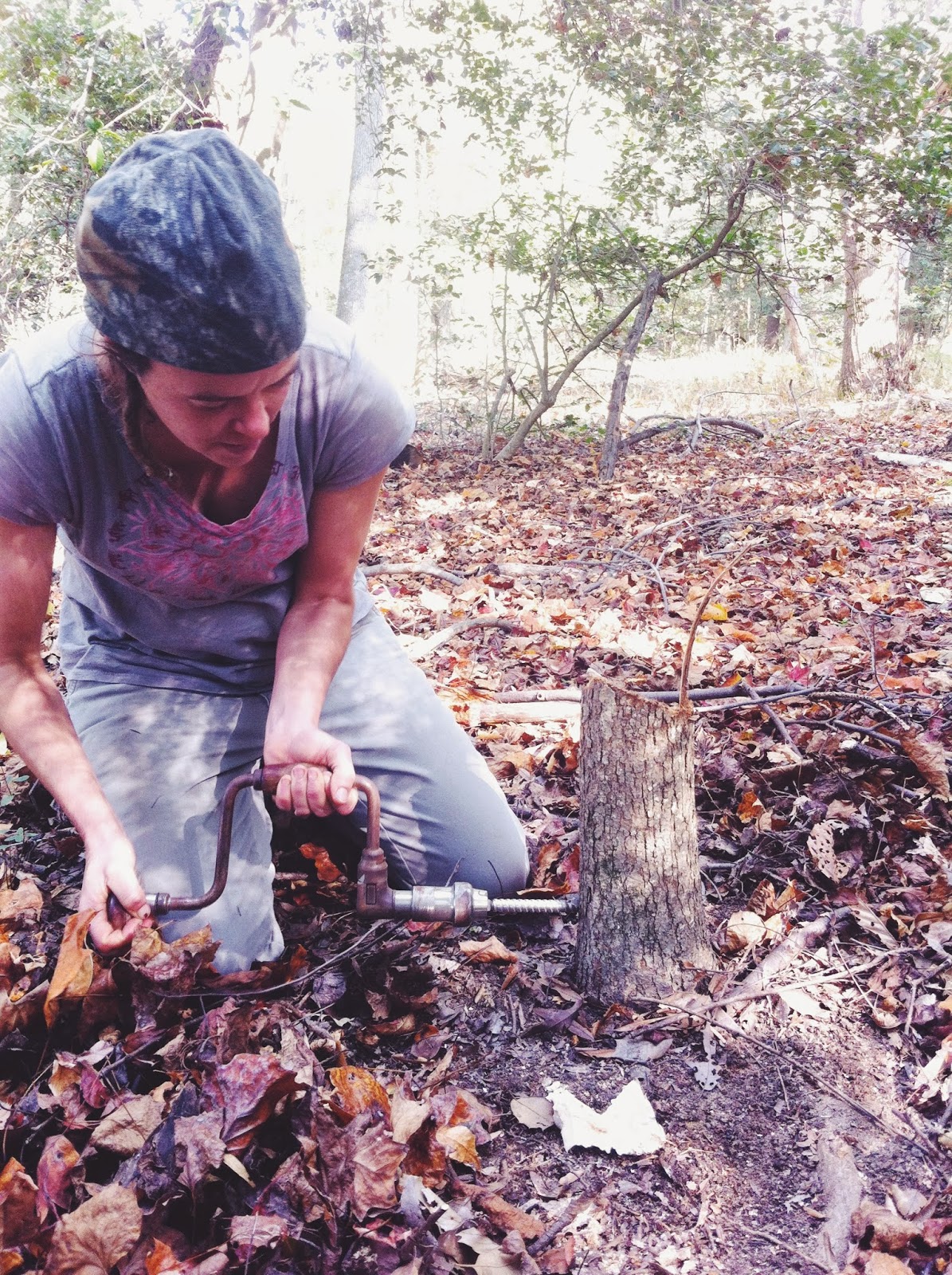 This class was such a fun, hands on way to start getting interested in the world of mushrooms. Honestly, it was way over my head for what I am ready to do with mushrooms but being around experts in any field is always humbling and inspiring for future endeavors.

Email ThisBlogThis!Share to TwitterShare to FacebookShare to Pinterest
Labels: Centro Ashe, Farms: MD, herbal medicine, Herbalism, MD community, What to do in: MD