Hey everyone, it's MOFO time! As I mentioned in a previous post I will only be blogging about vegan food this month so all my Buddhism, relationship, yoga talk will have to be put on hold. But for now, let's talk about food! 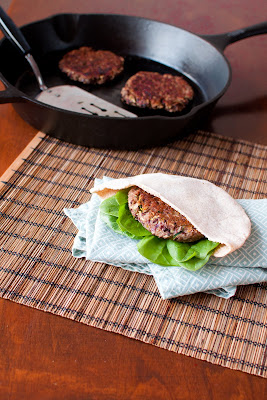 These patties are an adaptation from a Whole Living recipe. The patties were meant to be a twist on falafel I believe but I chose to make them more Mexican inspired by switching out the beans, adding spices and changing the topping and of course I veganized it. 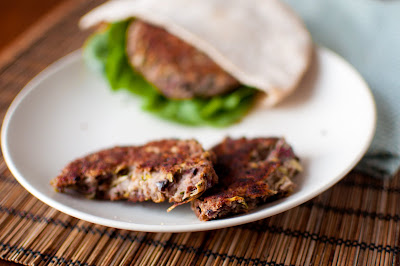 To make the patties:

2. In a food processor (or by hand if you want to go all natural!) shred the zucchini and red onion.

3. Add the shredded veggies, cup of breadcrumbs, whisked flaxseeds and spices to the black bean bowl. Use your hands to mix everything together well and then form the mixture into 8 patties.

4. Heat enough oil to coat the bottom of your skillet (cast iron! I can't tell you enough how awesome cast iron is for this kind of stuff) over medium heat. Fry each patty until its brown and crisp on both sides then remove them to a plate.

5. Stuff each pita with fresh spinach or green of your choice. Place a patty on top of the spinach and serve with salsa.

To take the patties to go I found it better to slice them in half and then wrap them in a whole wheat wrap with the spinach, reserving the salsa on the side until you're ready to eat the sandwich.

* To make breadcrumbs place several slices of stale whole grain bread in the food processor and then pulse until the bread is reduced to crumbs. Place on a baking sheet and bake for 15-20 minutes, or until toasted, at 400 degrees. 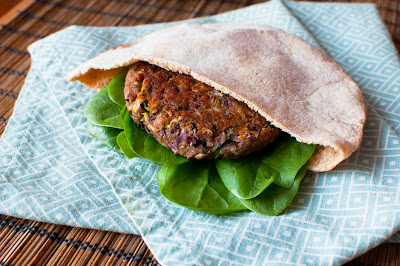 Yummmmm! I must try these. They fit so perfectly into the pita. =)

Am I weird that I think it looks adorable and sleepy, tucked away in the pita like that? Also, super yummy. I need to make variations on falafel; it's so awesome and yummy in its original form, alternate versions must be too!

These patties look really good, I am bookmarking this recipe!